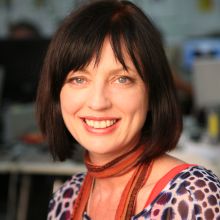 Tracey Robertson is the Chief Executive Officer of Hoodlum, an Emmy® and BAFTA Award winning Entertainment Company. As CEO, Tracey oversees Hoodlum Television, connecting with networks and studios to produce scripted content in Australia, the United States, and the UK.

Hoodlum has focused over the last two years on expanding its global slate across scripted and unscripted television and feature film with productions currently in development with partners including ABC Signature, Fox, Peacock, Netflix, CBS International and A&E amongst others.

Hoodlum is currently facilitating the second series of ABC Signature / Amazon series THE WILDS and is also in pre-production for the ABC cutting edge series ALL MY FRIENDS ARE RACIST which will both go into production in April 2021.

The second season of FIVE BEDROOMS, an 8-part series for Network Ten, distributed by NBCUniversal Global Distribution will go to screens later in 2021. Hoodlum’s third season of HARROW, a 10-part series with ABC Australia and ABC Studios International is currently on air in Australia. HARROW was ABCSI’s first scripted production outside of the US and both seasons are currently streaming on Hulu in the US. FIVE BEDROOMS is currently airing on BBC One in the UK and on NBC’s streaming platform, Peacock.

Robertson is a member of BAFTA, the International Academy of Television Arts & Sciences and the Australian Academy of Cinema and Television Arts (AACTA).  She was recently recognized as an outstanding alumnus and made an Adjunct Professor of Creative Industries at the Queensland University of Technology.